Šiauliai land was for the first time mentioned in an important document of that time, the Livonian Act, in 1254. The Volhynian Chronicle, or otherwise the Hypatian Chronicle, describes a treaty between the Confederation of Lithuanian lands and the Duchy of Halych–Volhynia of 1219, which mentions the dukes of Šiauliai land, the Bulioniai (Bulaičiai), who then ruled Šiauliai vicinities and lived in Bulėnai and Buleinė, also known in the 19th century as a place of Šiauliai parish church. Thus, the Bulioniai had to live in the current centre of Šiauliai city, which is believed to be the origins of the city, and rule the landholdings from there. This is what is written about these local rulers brothers: ‘Vismantas, who was killed by Mindaugas, who took his wife and killed his brothers Gedvilas and Sprudeikis.’ It is known that in 1219, Šiauliai land and other territories are represented by the local noble families, which at that time supported both Mindaugas and other grand dukes. In subsequent internal military campaigns for power, during which Mindaugas sought to overmaster all lands, Šiauliai people supported Samogitian duke Vykintas, who opposed Mindaugas’ plans, rebelling against him. However, he lost and his allies from Šiauliai, the Bulioniai – all three brothers Vismantas, Gedvilas and Sprudeikis – were killed. By the way, soon Mindaugas married one of the nobles of Šiauliai land – the wife of Vismantas, who died in internal fights, and in 1253, she was crowned as Queen Morta; thus, Šiauliai land can be justly proud of the only queen in the history of Lithuania, who belongs here. 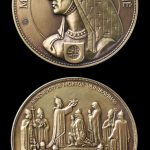